Go tell it on the mountain…. 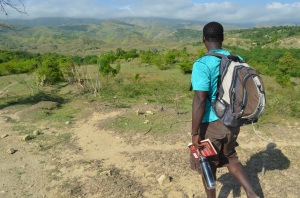 We were first, introduced to the village of Tivye by Stevie and Zacharie Estimé. This village is above Charrier is accessible by foot only. One day as the Estimé’s went for a walk they came upon this village and were warmly welcomes.

Several times we visited the village with teams and one day had the opportunity to sit with the elders and talk about their lives, living off the land, and their needs.

They expressed their need for a water pump for daily use as well as for irrigation of their crops. Haiti’s climate includes a rainy season but also a very dry, arid season. During this dry time, crops are lost. We asked them to pray about their needs and they agreed. Later, Zacharie told us that he was surprised they allowed us to pray, as they were a voodoo community.

Later a team visited to investigate what kind of pump would be most appropriate and how they wanted to do the project. We again asked them if we could pray for a pump and again they agreed but this time they laughed and made fun of us. Little did they know that God was working. When we returned to the states, two checks were waiting for us to be used for the water pump project.

Teams traveled to Tivye in January 2014 to construct a dam and water reservoir and install the water pump. They worked side by side with the Haitians, enjoying fellowship with each other.

Later in the year they showed us they expanded the project, creating a canal almost a ½ mile long to channel the water down into the valley where their gardens were. The gardens were lush and green, potatoes, manioc, peppers, bananas and other vegetables were growing and the people were grateful.

As we walked to the mountain each day, we saw a primitive structure being constructed a short distance from their voodoo tree. The villagers told us it was a church. There is a pastor and an elder. This pastor asked for prayer to lead the people. Voodoo is practiced there and he knows that his job will be difficult. There have been seeds planted in this community. We are praying that our work there will continue to water and nourish these seeds. Eventually we pray there will be a changed in the whole community. That they may come to faith and belief in Jesus Christ.

← So here goes our first blog post…
THE WALL IS FINISHED! →